Royal Men: Nipsey Hussle’s Funeral Will Be At The Staples Center 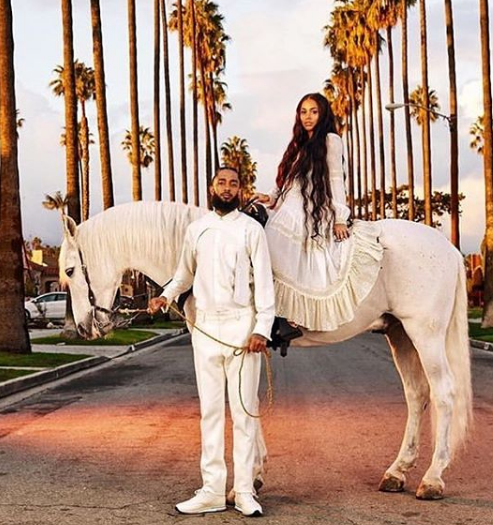 The home going services for Nipsey Hussle will be as epic as his life. His funeral will take place at the Staples Center in Los Angeles on Thursday, April 11. The last celebrity to have their funeral at the 21,000 seat-venue was Michael Jackson in 2009.

Rumors have been going around about ticket sales for Nipsey’s funeral, but close friends since as Karen Civil has been setting the record straight on her Twitter.

I want to officially let @NipseyHussle fans & supporters know there will be NO selling of tickets to his funeral. A lot of incorrect information was released today, please know in the upcoming days and official statement will be made soon. 🏁

Nipsey, whose real name was Ermias Ashgedom, was reportedly connected to the street gang, the Rollin 60s Neighborhood Crips. However, he turned his life around for the positive and worked to give back to his community. He tried to do something good in his life and make change for the better. He invested in Vector 90, a space in South Central Los Angeles for your people to take STEM classes.  His store,  Marathon Clothing and his debut studio album, Victory Lap  highlighted the importance of entrepreneurship. He inspired women such as actress and fellow entrepreneur, Issa Rae, who says Nipsey inspired her to invest in her own community.

Watching Nipsey inspired me to invest and own in our communities. He was a solid man who loved his woman, his family and his community. This hurts.

#NipseyHussle left a meaningful legacy of Black empowerment through wealth building. May he #restinpower. 🙏🏾💗

Colin Kaepernick cosigned on Nipsey’s community work with a throwback video off the late rapper.

This is so painful! @NipseyHussle was doing great work for the people. Keep his legacy alive by carrying on his work! Sending love to his family. Rest in Power King 👑 pic.twitter.com/hE2MNibbZ7

His death is a blow to the hip-hop industry, such as bad gyal philanthropist, Rihanna.

This doesn’t make any sense! My spirit is shaken by this! Dear God may His spirit Rest In Peace and May You grant divine comfort to all his loved ones! 💔🙏🏿
I’m so sorry this happened to you @nipseyhussle pic.twitter.com/rKZ2agxm2a

Writer Aley Arion tweeted, “when I think about who inspired me to even *begin* to take investing/saving seriously & what “from the gutter” Black entrepreneurship looks like… it was Nipsey. not a classroom, not a schoolbook, not no college professor… it was Nipsey Hussle.”

Nipsey dated actress Lauren London for five years. Their recent couples interview with GQ has been especially hard to watch since the news broke.

Hours before his death, Nipsey tweeted, “Having strong enemies is a blessing.”

Having strong enemies is a blessing.

Nipsy was simply a man who wanted to do better with his life and encourage others to do the same. And he did. Why do the streets continue to fight this kind of progress. His killer is still on the loose. Sending our prayers to his friends and family.

Finances General On The Go

#royalteeapproved We love to see it!❤ Don't forg

#royalteeapproved When you see your friends and da

Processing…
Success! You're on the list.
Whoops! There was an error and we couldn't process your subscription. Please reload the page and try again.

Finances General On The Go

‘Books Became An Avenue’: How Malcolm Mitchell Is Providing A Digital Pathway For Kids Online

Oct 11, 2021 destiny ingraham
Beauty/Hair/Fashion Brand Builders Entertainment On The Go On The Rise The Career Woman Up and Coming